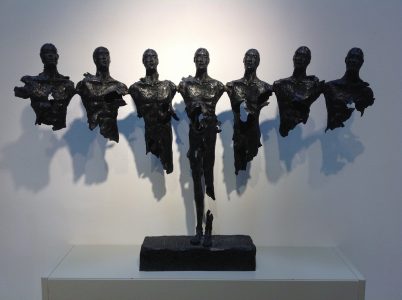 Denis Chetboune’s ragged and torn characters play with artistic conventions, inviting us into a bizarre world that is both contemporary and timeless. His beautifully-balanced sculptures resonate with the onlooker, inviting them on an intimate journey.

Denis Chetboune is a self-proclaimed autodidact. His childhood in Africa and his numerous travels developed his propensity to wander and detect by loitering: “Never ask anyone for direction; you will never get lost.” From the museums he haunts to the masters who inspired him, he mostly learned to unlearn. His constant wandering has raised many questions about the man and his destiny. His sculptures answer the question. He created them to engage in a dialogue with the viewer freely. As a sculptor, he works with media and techniques that allow multiples. However, most often, he only produces unique pieces.

He works directly with the wax, and bypassing the molding stage, avoids any possibility of duplication. His waxes are fragments that compose the final work. He then softens them to remove the tension. The nature of the medium itself commands the final piece and its extraordinary dynamism.

Ultimately, his artworks seem to be carried by an irresistible impulse whose origin and destination depend solely on the viewer’s imagination.

The discontinuity of the forms allows us to gaze and articulate the different volumes in which the work evolves. The different pieces are assembled, rearranged, and then welded together. Denis Chetboune allows us to see simultaneously the inner space and the external space in which it evolves. He represents figures, riders, and horses. His sculptures are chiseled, ghostly. The twisted bodies he brings to our gaze stab our soul.

It is indeed men’s fragility we are talking about. Denis Chetboune’s works are both tender and cruel but always human. It is not so much the tears that matter as what they induce, emptiness, loss, absence. It is a pretense to invite the viewer to see differently.

Thus, the artist allows us to simultaneously see the inner space delimited by the “skin” of the characters or objects, and the “external” space in which it is inscribed, The disturbance it creates, because of its “displacement”.

The former makes the latter disappear. Moreover, the initial impulse has thus superimposed the representation of its trajectory.

The writer Jacques Serena wrote: “His sculptures because they are contemporary, are deadly serious.” The artist received several awards, including the second prize and the first prize for sculpture from the National Society of Fine Arts in 2010.

His work is in the Estades Gallery collection since 2016. It is on display in the Gallery four locations in Paris, Lyon, Toulon, and Baden-Baden.