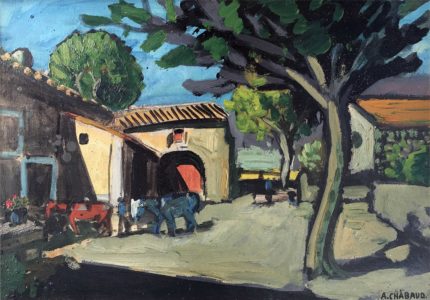 Auguste CHABAUD was born in Nîmes on October 3, 1882.
He attended the Avignon School of Fine Arts, then moved to Paris in 1899 to continue his artistic training. Paris fascinated the young painter, but he remained deeply attached to Provence, which had seen him grow up. He settled in Graveson in 1914, never to leave it again.

In 1901, CHABAUD had to leave Paris to earn a living. He joined the merchant marine. We all will remember from that time the many drawings of sailors and ladies of the night.

In 1907, CHABAUD moved to Paris. The lively streets of the capital, the prostitutes, the cafés, the world of show business fascinated him and became the favorite theme of his work.

At the same time, he continued to paint Provence and took part in the Salon des Indépendants and the Salon d’Automne, where he exhibited with the Fauves.

CHABAUD participated in numerous exhibits alongside Matisse, Derain, Vlaminck, Dufy, Modigliani, and Picasso.
In 1911, he started his cubist period, working in large formats and sculpting.

After the First WW I, he returned to live permanently in Graveson. He painted peasants, stables, and mainly landscapes of the Montagnette. In 1920 onwards, he began his blue period, using pure Prussian blue and highlighting Provence, its people, and customs.

CHABAUD has written many poems and books

These urban / rural influences will give birth to a powerful and unique work which, despite its diversity, shows a rare unity of sensations and expressions.

In 1966, he was represented at the exhibition “Le Fauvisme français et les débuts de l’impressionnisme Allemand” (French Fauvism and the beginnings of German Impressionism) which were held at the Musée d’Art Moderne in Paris and at the Haus Der Kunst in Munich.

Today CHABAUD’s canvases are included in the most important collections.