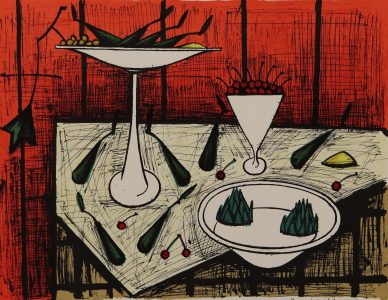 A controversial artist, loved by the general public and misunderstood by the elite, Bernard Buffet is unquestionably the greatest French master of the second half of the 20 th century.The dry, straight lines that distinguish his unmistakeable style are the trademark of his oeuvre. His iconic angular characters and sad clowns have forged his success. Many shows are dedicated to him throughout the globe. Between the year 2000 and January 2016, when the Buffet retrospective was shown at the City of Paris Museum of Modern Art, the artist’s popularity increased by 155% across all periods and techniques (source: Artprice). The Galerie Estades permanently exhibits works by Bernard Buffet, including oils on canvas, mixed techniques, drawings and original lithographs.

The son of Charles Buffet and Blanche Colombe, Bernard Buffet was born on July 10th, 1928, in the Batignolles quarter of Paris.

Buffet’s admirers have a boundless passion for him, acclaiming him as an artistic genius in the highest form. Admitted to the Ecole des Beaux-Arts (School of Fine Arts) at the age of 15, he decided to leave two years later to work alone. At the time, the young man was already considered an exceptionally-talented student and the painter Aujame introduced him to various collectors. He was awarded the Critics’ Prize in 1948 at the age of 20, tying for first place with Bernard Lorjou. He was elected Best French Post-War Artist by the magazine Connaissance des Arts in 1955. An emblem of the Miserabilist movement depicting the agony of WWII, Bernard Buffet was soon shown at the globe’s top museums. Highly-appreciated in Japan, an entire museum was dedicated to him in 1973 at Surugadarai under the impetus of Kichiro Okano. The museum is now home to an exceptional collection featuring around a thousand works by the artist.

The complex personality and talent of Bernard Buffet came to the fore from 1947 onwards. From then on, he exhibited his work annually in the capital. He presented L’homme accoudé at the Salon des Indépendants and in the same year fronted his first independent show at the Librairie des Impressions d’Art. Raymond Cogniat purchased Nature morte au poulet on behalf of the French National Museum for Modern Art. His long, angular silhouettes immediately categorized Buffet as part of the Miserabilist Expressionist Movement founded by Georges Rouault and Francis Gruber.

In 1948, art dealer Emmanuel David invited Bernard Buffet to sign an exclusive contract with his gallery at a key point in the artist’s career: an initiative that propelled him to international fame. From 1949, a yearly show of Buffet’s work was held at the Galerie Drouant-David, then at the Galerie Maurice Garnier, which obtained exclusive rights in 1968.

Living conditions became difficult in the post-war years. Bernard Buffet used his paints sparingly and adopted a very-reduced colour palette. His favourite colours were greys, blacks, bistres and greens. His dark and powerful creations, with their characteristic black brushstrokes, were filled with existential anguish. His skeleton-like figures, with their grey faces, wrinkled brows, straight, sparse hair and clenched fists were as if crucified. Little by little, Bernard Buffet’s style gained ground in the art world. Monseigneur Pasquale Macchi, the private secretary of Pope Paul VI, commissioned him to paint several works for the Vatican and in 1961, Buffet produced a series of canvasses retracing The Passion of The Christ for the chapel of his property Château d’Arc, which he then decided to donate to the Vatican museum.

In 1958, the Galerie Charpentier in Paris organised the first retrospective of his work. In the same year, Buffet met and wedded Annabel Schwob, who became his muse and lifetime companion. The artist’s style evolved and blossomed from that time onwards, gaining energy and colour. A show held at the Musée du Touquet entitled Une Symphonie de couleurs en plus (Nov. 2015 – Jan. 2016) allowed many admirers to discover this long-forgotten aspect of his work, often limited to his early production. His references became varied and included Grünewald, Rembrandt, Chardin and Van Gogh, to whom many of his works pay homage.

Bernard Buffet is a perfect illustration of France’s dislike for contemporary figurative art. The artist was loved by the public and loathed by the élites, who considered his work as overly-prolific, overly-figurative and hence lacking in intellect. Throughout his career, Bernard Buffet produced around 8,000 works, including canvasses, watercolours, drawings, etchings and lithographs. He also created a number of decors for theatre plays and shows, along with costumes and templates for postage stamps in 1978 and 1991. He is ranked among the greatest names in 20th-century contemporary painting, alongside fellow prolific artists Picasso and Renoir.

In 1974, Bernard Buffet became an elected member of the Académie des Beaux-Arts and in 1993, he was awarded the titles of Officier de la Légion d’Honneur and Officier des Arts et des Lettres, testifying to the official and unreserved recognition of his creative genius in the eyes of the French intelligentsia, despite their former severe criticism. The only art critic who had defended Buffet’s work throughout was Lydia Harambourg.

Spiritual, whole, sensitive and tormented, Buffet remained a resolutely free spirit, guided solely by his creative genius and ignoring his critics. “The hate that surrounds me”, he said “is, in my eyes, the most marvellous gift I have ever received. I owe nothing to anyone. Few people can say the same.” He dedicated his whole life to his art, which became his existential goal. He left the world with dignity, in keeping with the words of Stéphane Laurent: “When you have nothing more to say, you commit suicide.”

The first symptoms of Parkinson’s disease appeared from 1997. Unable to continue painting as he wished and physically diminished, Bernard Buffet ended his days on October 4th, 1999 in his house in Tourtour (Var area), by suffocating himself with a plastic bag bearing his signature.

Nb:
The Blue Clown” by Bernard Buffet, Please do not send a valuation request. The original work is part of the Bernard Buffet endowment fund.