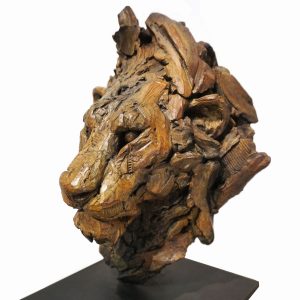 Michel Estades is a passionate art dealer with 30 years of experience. He enjoys sharing his expertise and favorite artists. His four galleries feature a permanent collection of figurative artists of the 20th and 21st centuries. In the gallery portfolio: Grand Masters, Provençal Masters, Masters from Lyon, Modern and Contemporary Masters, as well as emerging new painters and sculptors.

Sculptor Boris Campistron was born in 1988. He is living and working in Toulon. As a child, he spent most of his time outdoor. He graduated in Graphic Design in 2016 and worked briefly in the video game industry while continuing to practice painting, thus consolidating his academic foundations before devoting himself entirely to his art. It was by chance that he discovered sculpture and made it his preferred means of expression.
Since he was very young he was fascinated by animals. He was particularly fond of felines, which he spends time observing during his regular visits to the Mont Faron fauverie. Drawing his sources of inspiration from nature, myths and legends, illustration as much as modern figurative painting, Boris also represents the human figure.
His tool marks are intentionally left visible. His patina emphasizes the hollows and roughness of the material and is the reflection of an important moment in time, a part of the sculpture’s history. He does not smooth the sculpture’s surface but on the contrary, sublimate it in breathing life into it. This technique is inspired by Kintsugi, an ancient Japanese art of repairing broken pottery by highlighting its scars with gold powder instead of hiding them. Consolidated, embellished, the sculptures proudly bear their wounds, and paradoxically become all the more precious because they were previously damaged.
He is constantly searching for a balance between the raw strength that emanates from the final artwork and the subtlety that expresses its movement best, combining academic rigor and a contemporary approach to modeling.