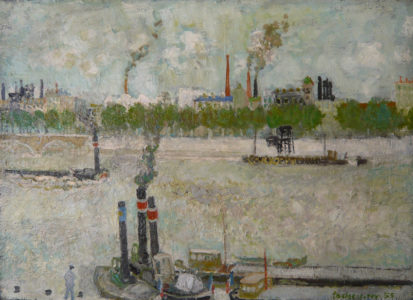 “There are almost no landscapes and few still lifes in his work. Nudes, portraits in particular of the people he met – streets, restaurants, cafés, billiard rooms, or concert halls. Cityscapes are more human than natural. It is not random. Even if ultimately, it is all about shape and color on canvas, there is no doubt that there is, in the beginning, something else: ourselves and our fellow human beings, just us, in our everyday lives.
When the painter, a solitary crowd’s lover, collects these figures against the walls of a café or a bar, they seem, for a moment at least, comforted, protected.
The color warms-up with reds, brick reds, ochres, and begin to look like twilight. Here too, celebrations are not triumphs or ostentatious shows. One could instead think of a fire smoldering under the ashes, a fire of goodness. The word should have come to me long before because this flame is also glowing inside Lachièze-Rey’s face.
Philippe Jaccottet, 1982