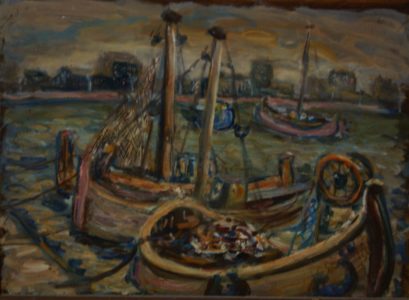 Jose Mange studied at Aix en Provence leading seminary. There, he discovered art and the paintings of Cézanne at the Granet Museum. He spends ten years in Paris in challenging circumstances. He returned to Toulon in 1895. He got married and returned to Paris with his wife.

During his Parisian years, Mange was exposed to the glowing work of Manguin, Monet, Pissaro, Degas, and the Nabis. He was also exposed to divisionists like Seurat and especially Signac to whom he remained loyal, and followed him in St Tropez between 1900 and 1915.

However, this stay in Paris was another failure. He returned to Toulon and never left it again.

Neither, the rigor of his technique nor solving significant graphic problems disturbed his candid soul. He knew how to appreciate an almond tree in bloom, a sunny cove, or a sliced open watermelon on a simple plate.

His friend, the poet Léon Vérane, aptly wrote: “Wherever he has been able to express himself with a minimum constraint and juxtapose his whim and fantasy on his chosen theme, he succeeded perfectly.”

With his burst of color, Mange unknowingly applied Friesz’s fauvist principle. He lived in misery in an attic, rue Magnaque in Toulon.
He only went shopping if he could sell a painting. He was often too poor to buy tubes.
A trained alchemist, he used pharmacist color powder that he mixed with petroleum or oil.

During his last years, Mange was supported by a small group of followers. Soutine, Friesz, Verdilhan sometimes visited him as well as younger painters from Toulon: Segal, Echevin, Baboulène.