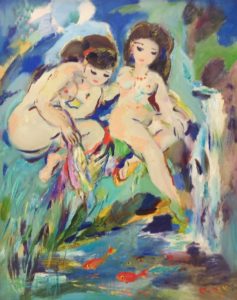 Ludwig Klimek was born in Krakow, Poland, in 1912.
He resettled in France at the age of 27 after Poland’s German invasion of 1939.

He often visits the Louvre Museum to explore the many artists he studied in Cracow: Titian, Goya, Rubens. Poussin fascinates him most.
Above all, Klimek is fascinated by architecture. What he paints is organized, composed, and a real balance emerges from his works. He settled in Menton and later in Juan-les-Pins.

Underneath the generous paste of his sun-drenched landscapes penetrates a genuine lyricism. His instinct dictates what he portrays. His vision becomes a dream. The impossible becomes possible, he paints.

Klimek is a sleepwalker.
“He develops a new space that recalls Kandinsky’s mysterious world and reflects some of today’s French paintings. Klimek’s work never ceases to surprise because it is essentially a creative impulse. It suggests a steady back and forth between our inner being and the outside world,” said G. Matore, Department of French Civilization chair at the Sorbonne.