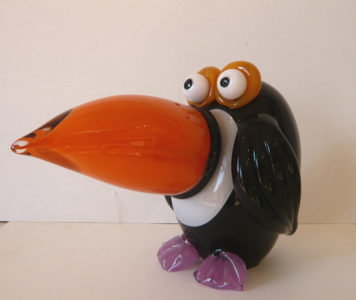 Trained by Jean-Claude Novaro and Michèle Luzoro, Nicolas Laty develops an astonishing mastery of the aesthetic possibilities of blown glass.
His universe is a voluntarily naive naturalism that finds its origin in the world of comic strips: it gives life to strange creatures with a remarkable expressiveness.

“The nature depicted by Nicolas LATY is free of hostility. Bestial without bestiality, his rabbits, lizards, dragons, Scottish, snakes, thousand paws, snails, walruses, ducks, birds, frogs, crabs, octopuses, sharks, are beyond any mythological, analytical, or allegorical meaning.
The artist tells us his state of mind is a childlike universe influenced by comic strips, cartoons, daily observation, and discoveries resulting from practice and experimentation, a universe from which humor is not absent and could, why not, resemble a Figuration libre applied to glass.
His pieces are present in the most prominent glass galleries in France and abroad. They have been selected for several national exhibitions.

Nicolas Laty, learned his technique from Jean-Claude Novaro, his spiritual father, and friend. He confides he now works by himself, perfecting his art and opening to new possibilities.

Beyond the playfulness that dominates his work, one must inspect how the material’s potential is used. The pieces are blown and then worked with a blowtorch, endowed with harmonious chromatic effects and various inclusions. Transparent, translucent, opaque textures interspeed on polished or frosted surfaces. One can feel both the flexibility of the movement and the material’s versatility. Many elements that serve well the nature of this animal microcosm.

After only a few years of practice, the young artist who is unafraid, curious, spontaneous, instinctive, intelligent, sensitive, is the author of a singular creation. He was selected for Venezia Vetro 2002. His protean and multimedia contemporary art evolves and proposes increasingly complex universes. The plasticity of the material and the artist’s creativity should continue to surprise us…”.
Manuel Fadat

“A sprawling octopus with brown reflections, a wasp with a black nose and blue eyes, a green crocodile crawling with its mouth open… Nicolas LATY’s cheerful and mischievous animals have amazed Novaro. So much so that the artist now sponsors Nicolas, whose blown-glass explores a playful world. A world of cheerfulness and freshness which symbolizes the new generation of artists – glassmakers “.
Midi Libre, 24/11/1999

Here is a child who has put an undeniable creative talent at the service of his dreams. It has earned him a front door entry into the closed network of known glassmakers.
These brightly colored foreign animals, mice, bees and pigs, snakes, and octopuses invite you right away to play with them. With a rare freshness and spontaneity, they are the symbol of a playful art that opens the way, for the young creator, to more expansive artistic designs. Nice Matin.

“A sharp zoomorphic reflection punctuates the freshness of Nicolas’ vocabulary. Its blown volumes feature wild or domesticated animals. Indeed, others like A. Seguso, F. Agostinho have done so before. Nevertheless, Nicolas LATY’s sculptures are characterized by an acute sense of communication and a skillful handling movement.
Verre et Creation. March 2003