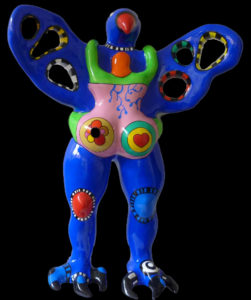 Niki de Saint Phalle, was born Catherine-Marie-Agnès Fal de Saint Phalle, in Neuilly-sur-Seine on October 29, 1930. She died in La Jolla, California, on May 21, 2002.
Niki is a French artist, painter, sculptor, and film director.
A model, and a mother, she was self-taught.

She did not have an academic education but developed her interest in art in abundant exchanges with her elders and contemporaries.

In 1961, she became member of the Nouveaux Réalistes group, along with Gérard Deschamps, César, Mimmo Rotella, Christo, and Yves Klein.

She had two children with Harry Mathews and later married artist Jean Tinguely in 1971.
Together, they created numerous monumental sculptures, either as a commission or solely for entertainment.

The Stravinsky Fountain in Paris was a state commission for Niki, and Le Cyclop, Jean’s creation, on the outskirts of Paris, was completed without a building permit.

Les “Tirs”, a series of performances, shooting at canvases, made her internationally famous in the 1960s.

Some were created on her initiative and with her own money, such as the Tarot Garden in Tuscany, or Queen Califia’s Magical Circle in Kit Carson Park in Escondido, California.

States or regions commissioned others. Notably, in 1971, in Jerusalem, the municipality commissioned a children’s monster, “The Golem”, inaugurated in 1972 in Rabinovitch Park, which now bears the informal name of The Monster Park. In 1994, the Jerusalem Foundation commissioned another series of sculptures for the Jerusalem Bible Zoo. Niki produced a series of animals entitled Noah’s Ark and completed the work in 1998. In 1987, French President François Mitterrand commissioned her for a fountain at Château Chinon.

Playing on her beauty and her talent for wearing strange outfits, the artist very quickly attracted the attention of the media, along with her companion and later husband, Jean Tinguely. However, while her apparent casualness fooled the media, art historians such as Catherine Morineau, Pontus Hultén, and Amelia Jones valued her strong, oversized, and risk-taking work.

She supported many political and social causes of her time, black America, women’s liberation, AIDS, and dedicated herself to her companion’s posterity by working for the opening of a Tinguely Museum in Basel.