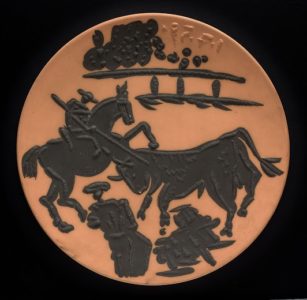 Symbol of 20th-century art, and an immense artist in his own right, Pablo Picasso is a painter, sculptor, engraver, and ceramist.

Arriving in France at the beginning of the century, he and his friend Georges Braque were the Cubist movement leaders.

With an exceptional thirst for originality, he explored all the art movements of the 20th century, surrealism, expressionism, or neo-classicism. He became one of the undisputed masters of modern art.

Artist from a very young age

Born in Málaga in 1881, Pablo Picasso was the son of Don José Ruiz y Blanco, a painter and drawing instructor, and Maria Picasso y Lopez. Picasso composed his first oil painting at the age of eight. Encouraged by his father, he studied at the Guarda in La Coruña and then at the School of Fine Arts in Barcelona. He exhibited “The First Communion” at the Fine Arts and Industry Exhibition in Barcelona. Although he did not win an award, a major newspaper praised noticed him.

In 1900, Picasso went to Paris for the first time with his friend Casagemas. He discovered the works of Toulouse-Lautrec, Cézanne, Degas and Gauguin. Some of his work was starting to sell in France and Spain. The painting “Derniers instants”, which later he covered with “La Vie”, was exhibited at the World Fair in Paris. The following year, the artist changed his father’s name (Ruiz Blanco) in favor of his mother’s now world-famous name, Picasso.

Casagemas committed suicide in 1901. Severely affected by this event, Picasso painted various portraits of his former friend. It inaugurated his Blue Period. Picasso settled in Casagemas’ studio in Paris.

The period between 1901 and 1903 is known as the Blue Period. Blue dominates the artist’s canvas. The color transcribes the painter’s vision of the world, a mixture of old age distress, poverty, and death.

After a short stay in Barcelona in 1902, Picasso settled permanently in Paris at the Bateau-Lavoir. He fell in love with Fernande Olivier. It brightened up his paintings.

He becomes interested in the circus’s world, and paints harlequins, jugglers, and acrobats in pink hues that evoke a certain melancholy. His pink period ended in 1906 when Picasso started to create a much more geometric body of work.

As he entered his twenty-fifth year, Picasso changed his style of painting again. He broke down and reproduced objects into simple geometric shapes.

Cézanne, African art, and Iberian sculpture were the painter’s sources of inspiration as he turned into cubism.

His new style exploded with the “Demoiselles d’Avignon” completed in 1907. That same year, he met Georges Braque, and together they developed the Cubist movement.

Braque and Picasso provided a new answer to solve the issue of three-dimensional representation on a two-dimensional surface,

They replace the traditional systems of color, volume, and perspective with a system of geometric symbols. In a later phase, called synthetic cubism, they added fragments of sand, paper, sheet metal, wood, fabric, cardboard to avoid falling into abstraction. Picasso dropped cubism in 1915.

At Jean Cocteau’s request, Picasso created the sets and costumes for Diaghilev’s Ballets Russes. He met ballerina Olga Koklova, and married her. They had a son together. For a time, the artist returned to figurative and realistic art and created several family portraits.

From the 1920s on, his paintings leaned towards surrealism. He painted large bathers with dislocated bodies.

In 1927, a new woman appeared in Picasso’s work. It was his mistress Thérèse Walter. He made several portraits and sculptures of her.

Guernica or the Horror of War

In 1937, a civil war was tearing Spain apart. Picasso got severely affected by the bombing of the town of Guernica. At the Paris world fair, he represented the tragedy of the city to denounce the Spanish government.

This monumental painting is one of the best-known examples of the painter’s works. In it, Picasso displays his anger and revolt against the barbarity of the regime. Guernica is a universal symbol of war’s horror. Striving for peace, Picasso painted the magnificent “Dove for Peace” in 1949.

Despite the harsh climate of the German occupation of France, Picasso’s creativity never wavered. He wrote a play “Le Désir attrapé par la queue” in 1941. He depicted in dark themes the folly of humanity in works such as “le Charnier”. In 1944, he became a member of the Communist Party.

In 1946, Picasso fell in love with Françoise Gilot. This budding love and the euphoria of the Liberation bring back some cheerfulness, and he completes “La Joie de vivre”.

In 1948, the artist turned his attention to a new medium, ceramics. In 1954, he met Jacqueline Roque and married her after Olga’s death.

For a time, he explored and reinterpreted the work of great masters such as Manet’s “Le Déjeuner sur l’herbe” and Delacroix’s “Les Femmes d’Alger”.

In 1961, Picasso moved to Mougins in the company of Jacqueline Roque. He died there of a pulmonary embolism at the age of 91, on 8 April 1973.

Picasso was a protean and prolific artist who produced over 30,000 works and turned modern art upside down.

With George Braque, he gave birth to cubism. “Les Demoiselles d’Avignon” was the first significant work of this movement.

Painter, sculptor, engraver, and ceramist, his genius was recognized during his lifetime. Today, a dozen museums in the world are dedicated exclusively to his work.