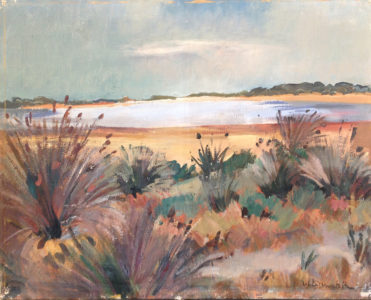 Willy Eisenschitz (1889-1974), was an Austrian painter trained at the Academy of Vienna. From 1912 on, he lived and worked in Paris. After the First World War, he discovered during trips to the South of France and Italy the light of the South. It overturned his vision and contributed to his distinctive style.
Following in the footsteps of Cézanne, whom he admired, he emphasized the permanence of geometry in nature. He used a minimal range of colors with exquisite subtlety.
Instantly his landscapes brought him the recognition of a talented painter.
He exhibited in the great Salons in Paris and in many of the most famous galleries of the time, including Berthe Weill and Joseph Billiet. Acclaimed by critics, he was bought several times by the State and foreign collectors. Next to the objectivity of Cubism and the ephemeral nature of Impressionism, his work based on harmony and proportion, was far removed from the often violent expressionism of painters from Central Europe.
In 1927, Willy Eisenschitz moved to the Minimes estate in La Valette du Var. He took an active part in the life of the artistic community that animated Toulon and Sanary between the two wars. He proved to be a watercolorist of great talent who was admired by Aldous Huxley and Jean Giono. Naturalized French in 1935, he fled to Dieulefit in the Drome region during the German occupation of WWII.

Less present on the Parisian scene after the war, he exhibited regularly in the Salons and the Galeries du Midi with his wife, Claire Bertrand, also a painter. While remaining finely composed, his painting became looser and more colorful.
Thoughtful, measured, but also a visionary and spiritual artist, Willy Eisenschitz explored the reality his way by questioning it tirelessly. Despite the repetition of themes, the intimate dimension of each oil, watercolor, or pastel is an emotion felt by the artist that the viewer is invited to share.

He painted the harshness of the Spanish landscapes, the austerity of the Drôme Provençale, the melancholy of the Parisian canals, and the laughter of Provence and the Balearic Islands, the brightly colored flowers, and the sensual nudes.

Above all, it reflects deep sensitivity, dented by neither joys nor sorrows and a passion for an art that resonates with a musical accent. It explains why painting enthusiasts are so attached to the works of Willy Eisenschitz. Beyond a pleasant naturalism, they feel linked to the artist by the magic of a secret communion.
Jean Perreau. ( Art Historian – Art Critic – Expert )