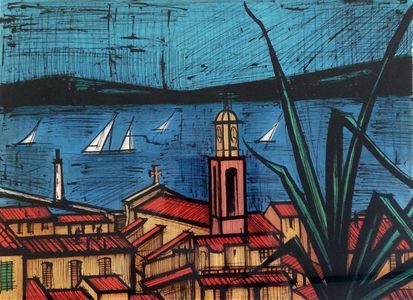 1. Themes
Buffet held an annual thematic exhibition at the Maurice Garnier Gallery.
Between 1952 and 2000, every February, the Gallery featured a new theme by Bernard Buffet

In 1978, the Postal Services commissioned Bernard Buffet for a model of a three-franc stamp: the Institute and the Pont des Arts. In 1991, he was commissioned for a 25.70 francs stamp: Piste de la Terre Adélie, published by the French Southern and Antarctic Lands Administration.
2. Style
The artist describes painting this way: “Painting is not spoken about, it is not analyzed, it is felt”. Bernard Buffet’s success is due to the synthesis he achieved between modern pictorial forms and traditional subjects. His style, like his signature for that matter, is easily identifiable by his technique of straight and dry lines covering the canvas.
The figures are systematically elongated. His palette was first composed of grey, ochre, black and brown. After 1958, it exploded in color but he reverted to his more familiar style of harmonies and dull colors after the 1970s
3. Techniques
As a complete artist, Buffet created numerous works using various painting techniques: oil, watercolor, Indian ink, pencil, as well as various printmaking techniques (etching, drypoint, lithography).
He produced his first lithograph titled “Les Chardons in 1952 “. The artist had his work printed in Switzerland, at Maisons Arts Graphiques in Lausanne, Berto in Marseille, and Marcel Durassier in Paris. He worked closely with the great Maison MOURLOT, a famous lithography studio that was also frequented by Joan MirÓ, Henri Matisse, Marc Chagall, and Pablo Picasso.
The Estades Gallery presents a permanent collection of lithographs of exceptional quality resulting from this fruitful collaboration.
Discover below his various works including many lithographs!