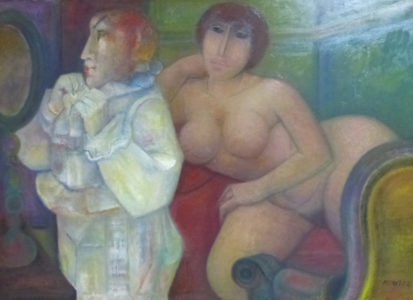 BLASCO MENTOR was born in Barcelona in 1919.
He studied at the local School of Fine Arts.
He was awarded the Silver Medal of the Academy of Fine Arts of Barcelona in 1933 and 1934. He enlisted in the Republican Army from 1936 to 1939.
He moved to Paris in 1945. Various awards mark out his career as a painter:

In 1953, he was awarded the Paris Drawing Prize and was declared out of competition the same year at the Prix de la Critique.

In 1966, he was awarded the Prix des Peintres Témoins de leur Temps for the body of his work.

In 1968, he was unanimously awarded the Mention spéciale à l’unanimité of the Prix de la Critique for a mural painting in La Courneuve.

“…The taste of enchantment and the feeling of reality coexist in his work. Reality is knowingly being transgressed…”

Dense composition, nudes with full forms, a little heavy, bouquets of flowers pressed together, full art, rough, thick texture, there is no room for emptiness in his work.

His art is sensual without concession or artifice. The drawing is firm, without trickery, the painting limited to warm colors, and the impasto has the richness of an underside worked lovingly and brought to light.