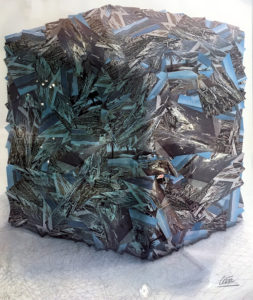 Primarily, Caesar is an unusual individual who always cultivated his Southern France accent and candor.

“I am fundamentally completely self-taught.”

“I hung out in school for several years. Where else would you want to go? A school is a place where you have numerous material possibilities: you meet friends, you have a university cafeteria, you have social services. It is a bit like a family. There was also the 39-45 period, which unintentionally kept us longer there”, he would later say.

He worked with plaster and iron, among other materials, until he learned arc welding in 1949, which led him to turn to scrap metal.
“Carrara marble was too expensive, and old scrap iron was lying around. I became a sculptor because I was poor!”

Initially, he produced figurative and rather classical works. Welding together various pieces of found metal, he turned to his signature “Compressions” in 1960.

He joined the group of the new realists in 1961.

Caesar was and still is a popular artist. However, the self-inflicted loathing he showed towards his art and the doubt he expressed about it probably worked against him.
He was not taken seriously until his death. Nonetheless, his public image has been rehabilitated through several exhibits, including a retrospective organized by his friend Jean Nouvel at the Fondation Cartier in 2008, titled “César Anthologie by Jean Nouvel”.