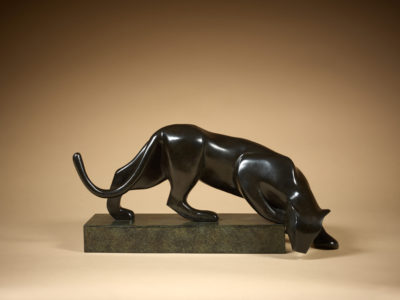 Isabelle Brizzi is the great-niece of Casimir and Isidore Scudéri, two brothers animal sculptors and founders from Italy.
They set up a small foundry in Clamart in the Hauts-de-Seine region of France in the 1930s. They quickly gained the trust of Alberto Giacometti, Salvador Dali, and Joan Miro.
When she was a child, Isabelle used to visit her great uncles’ workshop. They introduced her to clay modeling. Under their supervision, she made her first animal sculptures.
After studying art at La Grande Chaumière, Isabelle started a career in animation. She worked in her two brothers’ studio, later bought by Disney with whom she collaborated for a while.

She stopped working after the birth of her daughter. She returned to her initial passion – sculpture – and the animal world as a primary inspiration.

Isabelle Brizzi took sculpture classes to improve her skill. Conjointly, she attended Jack Thiney’s lectures at the Museum of Natural History in Paris, where he was the chief taxidermist for 40 years, contributing to the conception of the Grande Galerie de l’Evolution.
Jack Thiney taught her animal sculpture, anatomy, and the technique he used to prepare animals.

Since 1998, she has been living exclusively off her work. Recognized by her peers, she received numerous awards, including the Gold Medal at the 2007 Salon des Artistes de Bry-sur-Marne, the Gold Medal for Sculpture at the 2004 Salon des Arts de Joinville, and sculpture First Prize from the City of Saint Maur in 2003. She exhibited internationally in London, Miami, and Brussels.
Since 2012, her work is featured in the Estades Gallery permanent collection and featured in the Gallery four locations in Paris, Lyon, Toulon, and Baden-Baden (Germany).

Isabelle Brizzi: her passion for animals

The training she underwent allowed her to study animal anatomy with precision.
However, more than the accuracy, it is the essence of the figure that she tries to grasp. She executes her work in two stages. First, a meticulous phase of anatomical research and observation of movement, visiting zoos, viewing animal documentaries, or taking photographs. Then, she lets the animal’s character inspire her. Her bronze sculptures have no eyes, except for the monkeys, whose eyes are essential. The result is a surprising world between abstraction, humor, and tenderness. Even if she acknowledges classical masters like François Pompon and Rembrandt Buggatti, Isabelle Brizzi appreciates contemporary artists’ originality in animal art.

Isabelle Brizzi. Price of her work

Buy or sell a work by Isabelle Brizzi