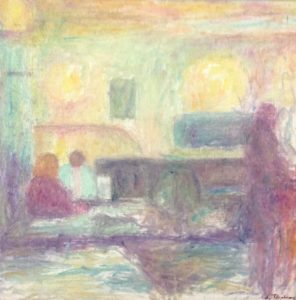 Jacques Truphemus, a painter from Lyon, born on 25 October 1922 in Grenoble.
He lived and worked first in Grenoble, and later in Lyon and the Cévennes region.
He was a student of Chancrin, Laplace, Chartres and Vieilly at the School of Fine Arts in Lyon (1942-1945). His classmates were Cottavoz, Fusaro, P. Coquet, H. Mouriquand and Philibert-Charrin.
In 1947, he left for Paris and stayed at the Grande Chaumière. That same year, he exhibited at the first “Salon des moins de Trente Ans” alongside André Cottavoz and Bernard Buffet. In 1948, back in Lyon, with his colleagues from the Beaux-Arts, he founded the group “Sansiste”. They exhibited in the chapel of the Ampère high school.

“Jacques Truphémus, a painter of Lyon’s atmospheres, lives and works there.

Is it enough to summon this city for an artist who knows so well the color of the Mediterranean, the grey of the North Sea, and the austerity of the Cévennes?

For those who love him, he indeed remains attached to Lyon, the mists on the quayside, the Saône river, couples in cafés, indistinct, alive, small windows opening on skies whose pallor is eternal.

The intimacy of the interiors, dimmed light whose quietness stops time, Lyon, is held in modest serenity. Truphémus incessantly invokes the calm happiness of life.