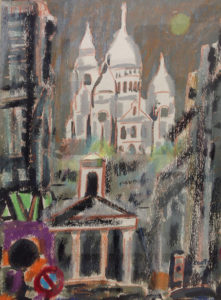 Jean Couty was born in 1907. His family, masons from the Creuse, left the Limousin region as Compagnons de France. Early on, he was attracted to drawing and poetry.

In 1925, after graduating from high school, he enrolled in the School of Fine Arts architecture program in Lyon. Painter Tony Garnier hired him as an intern. He later enrolled in the architecture graduate program at the Paris School of Fine Arts.
Although he got a DPLG diploma in 1933, he pursued his vocation as a painter.
During nearly 60 years, his long career was distinguished by works inspired by various themes, landscapes, portraits, Romanesque churches, social compositions, or construction sites.
He achieved lyrical depth by a line, a touch, a color, a composition outside of any style, or theory.
He affirmed, “To complete his work, an artist must remain free and protect his mind from compromise.

He had numerous exhibitions in France and abroad. Many salons welcomed him. He is featured in many private collections and exhibited in major French museums such as the Museum of Modern Art in Paris and the St Pierre Museum in Lyon.