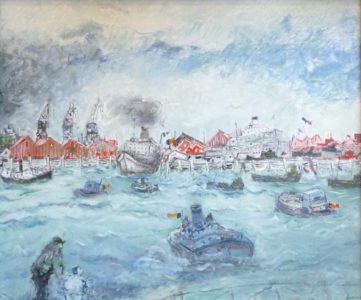 Jean Fusaro is a figurehead of the Lyon School. His fluid style and perfect mastery of colour hasve earned him success in both France and overseas. More suggestive than expressive, his paintings invite us to reflect on, listen to and feel the mood of the times.

Jean Fusaro was born in Marseille. He spent his youth at La Croix-Rousse and lives today in Lyon. His parents loved theatre, concert, and opera. They used to take their sons to visit Lyon’s museums every Sunday afternoon.

Jean Fusaro studied at the Beaux-Arts de Lyon from 1941 to 1946. He got acquainted with André Cottavoz and Jacques Truphémus, among others. In 1948, he exhibited for the first time at the Chapel of the Lycée Ampère in Lyon with the Sanziste group, including his friends André Cottavoz, James Bansac, Jacques Truphémus, and Pierre Coquet.
Sanzism, an art expression between figurative and abstract, wanted to decompartmentalize traditional art and reject impressionism, fauvism, and cubism. Hence its provocative name “sansisme”.

In the early years of the new French figurative painting, Jean Fusaro was busy but struggled. These were times of hardship, and he had to take on odd jobs.

Gradually, his notoriety increased, and he received numerous awards.
He was a quintessential artist in what is referred to as “L’Ecole de Lyon” alongside André Cottavoz and Jean Couty. In 1953, he received the Fénéon prize, and in 1957, the prize of the city of Marseille.

Since the end of the 1990s, Jean Fusaro has been part of the Estades Gallery’s permanent collection. His work is exhibited in the four sites of the Gallery, in Paris, Lyon, Toulon, and Baden-Baden.

His ethereal style of soft, barely glazed colors is popular in Japan. His work has been exhibited regularly since the 1970s. Internationally renowned artist Jean Fusaro’s art has been shown in various countries: Switzerland, Luxembourg, England, and the United States. From 1990 to 2010, he dedicated himself to mural painting, creating 19 wall paintings for the Church of Saint-Jacques-des-Arrêts in the Lyon diocese.

Jean Fusaro is an indisputable master of French figurative painting. His technique is reminiscent of Raoul Dufy or Pierre Bonnard.

He interprets landscapes with a mainly new range of colors. André Cottavoz said he has a smooth and exquisite technique. He is anti-decorative, that is to say, that there is not a color not being a function of light. His romantic oils on canvas reveal a joyous world with a certain innocence and a feeling of tension emerging in tormented skies or threatening suns.

In November 2017, Jean Fusaro, young and playful as ever, was awarded the medal of Chevalier des Arts et Lettres.

Jean Fusaro and the value of his work

The value of an artist or his work is a subject that fascinates potential art buyers, inquisitive individuals, and art lovers. Why do some contemporary artists such as Jean Fusaro sell some work for a few hundred euros while others can be valued at several thousand euros?
When buying and selling art, it is sometimes challenging for an inexperienced person to understand the price differences

Its value is built over time, like a good wine that ages and takes on character.

What is the gallery owner’s purpose in all this? He contributes to the evolution of the art’s value, notably by believing in the artist, talking about his work, sharing his knowledge of the work, buying and selling his work, and ensuring his place in the history of Art.

Setting an artwork price can be a real dilemma. One does not set the price of an original Jean Fusaro as one would estimate the price of a loaf of bread or an electric bicycle.

Lacking any practical viewpoint, how can one evaluate an art object and its potential to identify talent, emotion, and character? Some argue that the value of an artwork is, therefore, relative and subjective. However, there are also certain realities helping estimate the work of a contemporary artist like Jean Fusaro. Furthermore, they are quite detailed :

Do you own an artwork signed by Jean Fusaro? The signature is the first step in its authentication. Unfortunately, “signed” and “authenticated” do not necessarily add up because a signature can be reproduced.

Jean Fusaro. Buy or sell an artwork by Jean Fusaro

How to sell or buy a work by Jean Fusaro? Private sales allow personal and more confidential transactions. Auction sales are appreciated because they bring you the opportunity to get artworks at a competitive price. However, this process requires a serious commitment on your part.

A gallery owner or a professional art expert will guide you through the process. Their expertise and tailor-made advice will help you complete this exceptional purchase.

The Estades Gallery brings you the opportunity to acquire major works by Jean Fusaro, whether print, drawing, original signed lithograph, oil on canvas, gouache, watercolour, pastel, sculpture. Beyond buying and selling art, the Estades gallery will offer you expert advice and guide you in your art investment, whether you are an enthusiastic amateur or a dedicated collector along with the support and art environment you need.