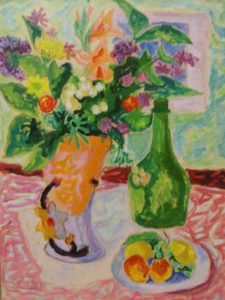 Jules Cavaille comes from Carmaux, a small town in the Tarn region. There, he was a draughtsman for the local mining company.

He met “Father Artigue”, a student of J.P. Laurens and friend of Henri Martin. He encouraged him to come and study in Paris.
In 1925, he studied under Pierre and Paul-Albert Laurens at the Académie Julian.

He exhibited at the Salon des Artistes Français, and after 1928, at the Indépendants and the Salon d’Automne.

Jules CAVAILLES was invited to the Salon des Tuileries. In 1936, he was asked to put together the 14th group show of “Artists of that time” at the Petit Palais.

In 1937, he decorated the Languedoc Pavilion and created various decorative panels for the Universal Exhibition.

Jules Cavaillès painted by juxtaposing pure color. Initially influenced by the Fauves, he followed a path familiar to many French painters between the two world wars, abandoning intensity and research to celebrate life.

He often exhibited with painters of the “Poetic Reality” such as Brianchon, Legeult, Oudot, representing reality and celebrating its natural beauty.

Today, some of his paintings are in the collection of several museums in Albi, Montpellier, Toulouse, Chicago, Helsinki, and Zurich.