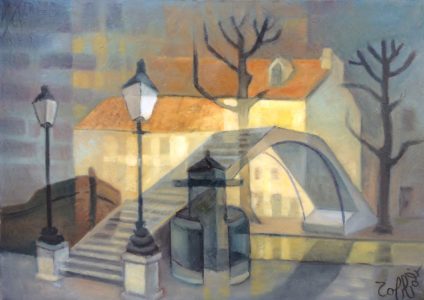 The work of Louis Toffoli, in particular his lithographs, is famed throughout the globe. His artistic world is vast and poetic, forged by many sources of inspiration. His paintings go straight to the heart and are literally transcended by his interplay between light and transparency.

Louis Toffoli was born at the beginning of the 20th century in Trieste.
Trieste is a port on the Adriatic that belonged at the time to the Austro-Hungarian Empire. His mother was from Slovenia and worked as a seamstress. His father, Italian, was a cook on a ship.

During the First World War, Italy declared war on Austria. His father was interned by the Austrians, forcing his family into exile in Italy. At the time, he was eight years old. He discovered in Padua, and in Florence, religious and secular art. His father died in Trieste shortly after his liberation in 1918. Louis Toffoli entered Trieste Naval School in 1924, but personal problems forced him to give up his studies. He worked as a blacksmith, later as a tailor, and attended evening classes at the Trieste Academy of Fine Arts. He presented two paintings in the constructivist style at the 1928 Trieste Biennale. Fascist propagandists took a close interest in his singular vision.

In 1930, Louis Toffoli took advantage of an organized trip to escape Mussolini’s regime and emigrated to Paris. He lived in precarious conditions on rue Myrha in the heart of the Goutte d’Or neighborhood, without papers or money. Sylvia, his future wife, soon joined him. Denis Kalman, a renowned couturier from the Faubourg Saint Honoré, hired him, and his model-making talent was soon recognized. He obtained a craftsman trader’s card and taught the art of cutting at the garment union chamber. Numerous orders allowed him to resettle in Alfortville in 1934, and in Charenton-le-Pont. He freelanced for Parisian fashion houses while taking drawing classes and trying his hand at poster technique. Day after day, he patiently refined his style, refusing work in advertising.

In the 1950s, he learned lithography. It contributed to his popularity. The pictorial expression of Louis Toffoli is characterized by a compelling observation of human posture, picturesque scenes, or man-made landscapes.

He exhibited in many countries, including Brazil, Spain, Israel, Morocco, and the United States.

Louis Toffoli. Price of his work

Buy or sell an artwork by Louis Toffoli

Would you like to buy or sell a work Louis Toffoli ? you are in the right place.
Michel Estades is an expert on the works of Louis Toffoli, a reference art expert for this artist. Buying a painting by Louis Toffoli (oil on canvas, lithography) at Galerie Estades guarantees the authenticity and the quality of the work.