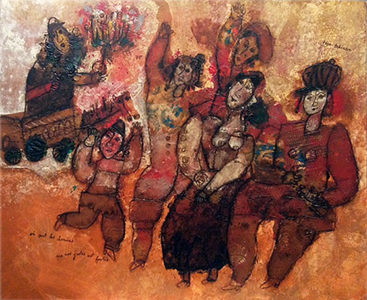 Théo Tobiasse is a major, internationally-renowned 20th-century artist. Throughout his career, his oeuvre never ceased to evoke his family story, marked by the tumultuous onward march of History. His work is truly moving.

Theo Tobiasse was born in Jaffa, His parents came from Lithuania, hoping to find the Promised Land. Material difficulties soon forced the family to return to Lithuania and then leave for Paris in 1931, where his father, a typographer, found work in a Russian printing house. Theo Tobiasse showed an aptitude for drawing and painting very early on. During a visit to the 1937 World’s Fair in Paris, he was amazed by Raoul Dufy “La Fée Électricité”. The death of his mother in June 1939, followed by the outbreak of the Second World War, the wearing of the yellow star, and his rejection from the Ecole Nationale Supérieure des Arts Décoratifs turned his life upside down. For two years, his family was forced to live in hiding in an apartment in Paris, narrowly escaping the Velodrome d’Hiver round-up in July 1942. After the liberation, he became a graphic designer in Paris. In 1950, he obtained the French nationality and moved to Nice, where he continued his advertising career.

He settled in Saint-Paul-de-Vence and discovered the fascinating lunar landscape of the Saint-Barnabé plateau near Col de Vence. It was his first painting. Self-taught, he studied the technique of the great masters in museums during his travels. His first paintings were exhibited at the Salon des Peintres du Sud-Est in 1960. In 1961 he won the Young Mediterranean Painting Prize, then the Dorothy-Gould Prize in 1961. He then decided to devote himself exclusively to the arts. Over the years, he had many international exhibitions in Paris, Geneva, Montreal, Tokyo, London, Kyiv, Los Angeles, and New York, which hosted his first solo exhibition in 1968.

Theo Tobiasse’s work is inspired by exile, motherly love, childhood memories in Lithuania, and the Bible. The celebration of the senses, color, music, and travel blend into a poetic magma against the backdrop of his favorite cities, Venice, New York, and Jerusalem. Words and phrases charged with emotion punctuate his work, not to explain it but to extend it. His oils on canvas, mixed techniques, lithographs, and drawings are sought after by many collectors. Théo Tobiasse has also created sculptures, stained glass, pottery, engravings, and monumental works. Since 2000, he has been permanently exhibited on the four sites of the Estades Gallery, in Paris, Lyon, Toulon, and Baden-Baden.

Théo Tobiasse, the price of the artist’s works…

Buy or sell an artwork by Théo Tobiasse

You wish to sell or buy a work by Théo Tobiasse? Here are some options.
You can purchase an artwork at the best price during a public auction, buy in lots, or series. However, this process requires a serious commitment on your part.

The Estades Gallery brings you the opportunity to acquire major works by Théo Tobiasse, whether print, drawing, original signed lithograph, oil on canvas. Beyond buying and selling art, the Estades gallery will offer you expert advice and guide you in your art investment, whether you are an enthusiastic amateur or a dedicated collector.

But beyond buying and selling art, the Estades gallery offers its customers the support and art environment they need.

Do you own an artwork signed by Théo Tobiasse? The signature is the first step in its authentication. Unfortunately, “signed” and “authenticated” do not necessarily add up because a signature can be reproduced.

Theo Tobiasse. The value of his work

The value of an artist or his work is a subject that fascinates potential art buyers, inquisitive individuals, and art lovers. Why do some contemporary artists such as Théo Tobiasse sell some work for a few hundred euros while others can be valued at several thousand euros?
When buying and selling art, it is sometimes challenging for an inexperienced person to understand the price differences

Aesthetic or economic criteria, number of exhibitions, many parameters contribute to the value of an artist. The value of a contemporary artist like Theo Tobiasse is not only based on aesthetics. However, it includes other variables such as the number of exhibitions, prestige, and notoriety of the places where the artist exhibited, the number, and the name of his collectors. It is built over time. The gallery owner contributes to the art promotion of the artist, notably by supporting the artist, talking about his work, sharing the knowledge he has of it, buying and selling his work as if it is a significant contribution to the history of art.

It is challenging to set a price on an artwork based on the value of the artist.

You do not set a price on a steel or bronze sculpture by an artist like Sacha Sosno as you would estimate the price of a coffee cup. Wanting of any practical aspect, how can we evaluate an art object, a talent, an emotion, an aura? Some will conclude that the value of a work of art is, therefore, relative and subjective. However, there are also specific realities helping estimate the work of a contemporary artist like Sacha Sosno. These are very detailed: