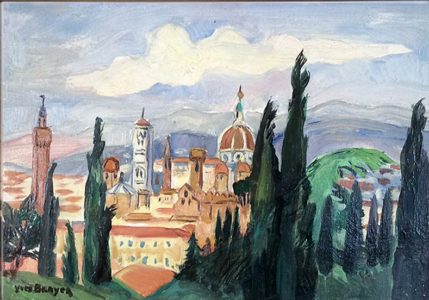 Gifted from early childhood and spurred on by his mother, Yves Brayer was an eclectic artist. A palette of many colours lights up his paintings. An avid traveller, his voyages throughout the globe provided an endless source of inspiration.

Born in Versailles, Yves Brayer spent his early years in Bourges. His mother soon discovered he had a remarkable talent for drawing. She enrolled him at the Bourges School of Arts. In 1925, his father, an officer in the French army, was reassigned in Paris. Yves Brayer continued to draw and paint. He attended the academies of Montparnasse and La Grande Chaumière and graduated from Ecole des Beaux-Arts.
Encouraged by great artists such as Jean-Louis Forain and sculptor Robert Wlérick, Yves begins to exhibit his works at the Salon d’automne and the Salon des indépendants. In 1927, he received a government scholarship that enabled him to travel to Spain. There he discovered the Masters of the Prado Museum. Yves Brayer traveled to Morocco, Spain, and Italy, and ended up settling in Camargue and Provence, his two favorite places.

Yves Brayer was very attached to the representation of reality and rejected the late 19th and early 20th centuries’ artistic movements.

Richness and diversity distinguish his work. Yves Brayer is a painter, engraver, illustrator, and theatre decorator. He excels in watercolor as well as in oil painting, lithography, engraving, and drawing. Using a wide variety of techniques, he is the author of a lavish production of landscapes and large compositions, figures, and still lifes. Elected member of the Academy of Fine Arts in 1957, and Grand Prix de Rome, Yves Brayer is considered one of the masters of the École de Paris.

After his Spanish black period, then ochre and red Italian period, the artist diversified his palette by introducing green, pale yellow, and blue. A great adventurer, he liked to capture the light and rhythms of the various countries he visited, and from which he brought back many drawings and watercolors. From 1963 on, his travels took him further away, to New York, exhibiting at the Wildenstein Gallery, and Mexico. Yves Brayer had a real passion for Provence’s Mediterranean landscape, fascinated by its pure and wild nature. Inaugurated in September 1991, the Yves Brayer museum in Les Baux-de-Provence, hosts over a hundred oils, watercolors, and drawings. His work is part of the Estades Gallery’s permanent collection since 1990 and is featured in the Gallery four locations in Paris, Lyon, Toulon, and Baden-Baden (Germany).

You want to buy or sell a work by Yves Brayer? you are in the right place.
Michel Estades is an expert on the works of Yves Brayer, a reference art expert for this artist. Buying a painting by Yves Brayer (oil on canvas, gouache, lithography) at Galerie Estades guarantees the authenticity and the quality of the work.